“Undermining the Values Of Democracy” {an excerpt from the above link}:

“Psychiatry is evil because it makes alienable, or voidable, human rights that the USAs Declaration Of Independence says are the God-given and unalienable rights of every human being: ‘We hold these truths to be self-evident, that all men are created equal, that they are endowed by their creator with certain unalienable rights, that among these are life, liberty, and the pursuit of happiness’. Dictionary definitions of ‘unalienable’ are cannot be taken away, surrendered, or given away; not transferable. When doing research for his biography of actress Frances Farmer, who was probably America’s most famous involuntary mental patient before her death in 1970, William Arnold learned something most Americans never think about (Frances Farmer—Shadowland, Berkley Books 1978, p. 125):

‘Psychiatry gained the extraordinary power to arrest, detain, and sentence any citizen to an indefinite confinement without due process. The mere accusation of insanity was all it took for the suspension of every single human right guaranteed under the Constitution.’

‘As time goes on, I become more and more aware of how awesome that power is. We’re able to just grab people and say, "You have to be here for seventy-two hours,” with no evidence other than our belief that it’s the right thing to do; and we’re empowered to do it. We don’t have to prove it to anyone. That’s a tremendously abusable power.’ [Paul R. Linde, M.D., Danger to Self: On the Front Line With an ER Psychiatrist, University of California Press 2010, p. 96]

It is also a power nobody should have in a country such as the United States Of America that says in its founding document, the Declaration Of Independence, that all men are endowed by their Creator with certain unalienable rights, one of which is liberty, and whose people and political leaders continue to claim is a nation of free people.

If administered as punishment, psychiatry’s biological therapies would be declared in violation of the USAs eighth-amendment prohibition against
cruel or unusual punishment, but as ‘therapy’ they are permitted to continue.

In states with no right to trial by jury in civil commitment, psychiatrists actually have the power to hold people prisoner indefinitely, not only for 72 hours, because what happens after 72 hours is the formerly free citizen, now reduced to being a mental patient in hospital clothes and “medicated” against his will into a state of reduced mental functioning if not outright stupor, gets a hearing before a judge who routinely grants all requests by psychiatrists for continued confinement, with rare if any excep­tions. I’m reminded of a justice of the peace in Kerrville, Texas in 2011 who in the conference room where hearings were held at the Crisis Stabilization Unit, a few minutes before hearing the first of four (4) cases, casually mentioned she was going to do whatever the doctor recommended, which is exactly what she did, committing all of the patients whose cases she heard. Hearings before judges who have this attitude, which is most of them, provide only a pretense of due process and do not protect against wrongful commit­ment. (For reasons pre­viously stated, all civil commitment of law-abiding and objecting persons is wrongful.) Even where the right to trial by jury exists, it is seldom exercised because lawyers supposedly representing patients don’t tell them they must demand a jury to avoid a kangaroo court hearing in which commitment is a virtual certainty (see “‘Assistance’ of Counsel?” in Unjustified Psychiatric Commitment in the USA).

Few Americans know how tenuous and uncertain is their freedom in America. Few Americans know they can be arbitrarily imprisoned at any time in a place called a hospital merely because someone (often a family member) is willing to pay a mental health professional to question their “mental health”. America advertises itself to itself and to the world as a free country. In American public schools children are taught how lucky we are to be Americans because of the freedom we have in America. Almost all of us Americans believe the misleading platitudes about our freedom we hear in speeches by our political leaders, espe­cially presidents, particularly on occasions such as the 4th of July and Memorial Day holidays. We sincerely believe the soldiers, sailors, and airmen who died for our freedom died for something real, but in fact the freedom for which Americans have died has been a myth through­out the Nation’s history for many Americans, starting at the Nation’s inception with Negro slavery and still today with what has been called psychiatric slavery. Because of psy­chi­atric stigma, the victims dare not speak out, and the myths of mental illness and of psychiatric diagnosis go unchallenged, and America’s promise of liberty ­continues to be false. Psychiatry is evil because it under­mines America’s most fundamental promise, which is freedom.“

Psychiatry took away my freedom each time it interfered, but not as
much as it would have liked {for I have fought the good fight}.

This Independence Day, no matter where you are on the planet,
always try to continue the fight for your freedom to be yourself/
become yourself. To be free of misleading teachings, as well as
brain/cognitive-disrupting drugs.

Every patient rear-ended by the system needs as many as possible
to expose the garbage … to give encouragement to the afflicted
and hope that the system will eventually reach its downfall.

Celebrate your Independence Day from psychiatry at any time! 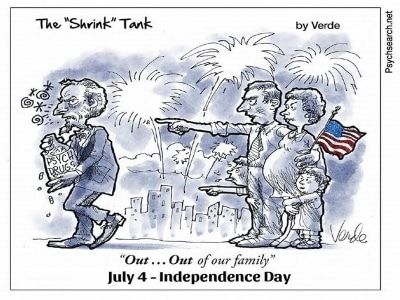 It is one of the, what I believe, most-ignorant words from many of the “mental health” workers: consumer I heard it so much at the day-program{s} and read of it, too. Everyone under any supposed-care is fully a person — and a patient.... Continue →